I have piece in Slate on for-profit college students.

The TL;DR version: critique structures and not people; descriptive statistics are not prescriptive; respect for-profit students’ agency even while examining the constraints on their agency.

It’s a nuanced enough argument even for academics. I have no illusions about how it goes over with a general audience. Thus, I do not bother reading comments.

One comment, however, found its way to me. I really only responded because the platform of the tweeter was significant enough to warrant that I exert authority over the contextualization of my argument: 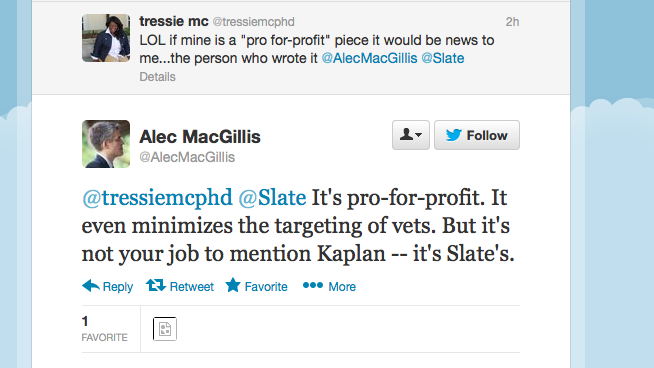 Alex MacGillis is with The New Republic, a smart-ish publication. I thought it worth a little hassle to express his mischaracterization of my argument. He disagreed, of course. It happens.

What followed was mostly logical fallacies and gaslighting and such. That’s fine. It’s the Internet! That would be boring to talk about. More interesting to me are comments that followed about writing: 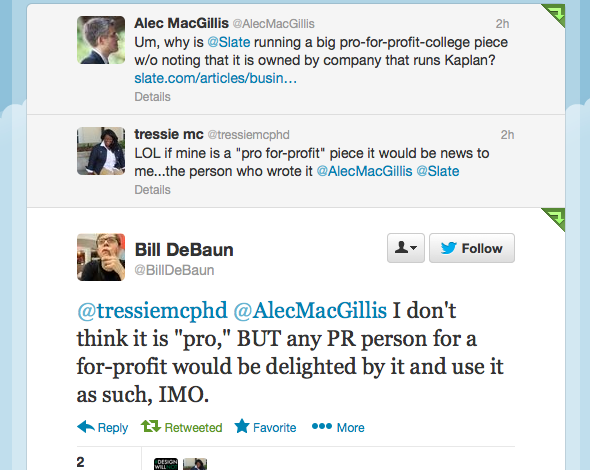 They prompted me to articulate what is largely, for me, an internal dialogue about  my writing process. They also gave me an excuse to talk about something I’ve as yet only mentioned in passing: the privilege of being righteously indignant.

It was not lost on me that my Slate piece was taken up by both for-profit boosters and critics. I let the words speak for themselves. The fact remains that I do not write with an eye towards how public relations firms will contort the message for their own purposes. I also do not write to assuage the fears of the privileged or to score points on the experiences of the unprivileged. Despite what some might believe, I’m not even interested in fame although I would not look a gift horse bearing a lump student loan payment in the mouth.

I’m afraid I’m more annoyingly earnest than that. I truly believe that all I’ve learned to do, been trained to do as an academic, comes with a responsibility to share it with people. My decision process for publishing usually involves some calculation of whether the argument is mostly self-aggrandizing, if it contributes anything at all to a debate, and how much time I have spent waiting for someone else to say the thing I would say. That’s a negative–positive—positive causal relationship, by the way. If it passes that test and I have the time, I write the thing. Mostly I write it here. Almost anything you’ve seen from me elsewhere results from an invitation. I rarely pitch because I am clear that my primary job right now is completing a PhD.

Writing to ward off PR campaigns strikes me as a really good way to fail at two of my three publishing criteria. The only thing rarely interesting enough to be misconstrued is a self-aggrandizing essay that is so milquetoast that even bottom feeders can’t muster the energy to leave an internet comment. And, few essays can make a contribution to a debate not yet raised by someone smarter, more connected, or more important than me if the essay is hedging against making anything akin to a declarative point for fear of being PR fish food.

I simply cannot let hypotheticals and counterfactuals change how I write. It seems to me that’s the easiest way to never write anything that matters.

And the subjects about which I write often matter to me. That should be evident to regular readers. I have a rule. I never, ever hit publish when I’m mad. I write when I’m angry, but never when I’m mad. I do not have the privilege to be that gloriously, publicly irrationally emotive even when my content may be factually accurate and well-reasoned. In this regard, I have come to understand that being righteously indignant is a type of privilege I am not afforded.

I speak only for myself here but performing the righteous part of indignation requires a kind of immunity from the subject that I do not have. It is like discovering poverty while writing at local Starbucks. Of course you can be righteously indignant! There is POVERTY and you have SEEN it with your own eyes. I had a professor once who, I think, hated me a little because he liked to show us these horrible images of Dalits in India. Every week for a semester it was all dire images of poor, rural, brown people defecating in holes. When he’d shout, foaming at the mouth, “have you ever SEEN ANYTHING LIKE THIS?!” I’d always say, “yes.”.

I get how it can be news to some of you that people are victimized by systems legitimated by your nation, countrymen, and god. But I’m black and female and southern. I call that Tuesday. Before for-profit colleges it was insurance companies squelching on paying policies to poor blacks. Before today’s GI Bill was ripped off black vets were systematically obstructed from accessing their GI benefits. For me, these things have always been there. Righteous indignation at recognizing them now would be disingenuous. That doesn’t mean I do not care deeply about the issues but it does mean that I cannot perform status culture markers of indignation to emotionally reward others for their come-to-Jesus moment.

Further, I am under no illusions about the contradictions I embody. I am many attributes considered the natural domain of white men in a black female body. That confuses people. Should I give in to the elitist disingenuousness of righteous indignation I am more likely to compromise my research than I am to make any difference. And to be of use to the people I care about, to contribute to issues I care about, I am more useful as a researcher, even one embodying role conflict and confusion, than I am a righteously indignant agitator who can be easily dismissed as a loud mouthed black body. I may still be dismissed and I often am. Indeed, how many people would dare deign to tell white male writer with half a PhD, dozens of published articles, and an academic affiliation the meaning of what he wrote? Despite it being an almost no-win proposition, I still think it better than pretending to be something I am not to the detriment of the arguments I put forth.

And, my argument on for-profit colleges is clear and well documented. If you give me a minute I’ll even give you a couple of books, a diss, a few articles. As it stands, it is very easy to read what I say my argument is. Of course, that requires you accepting that I am the authority on what i write. I am, of course, but you would have to accept that. If you do, and you read me, you’ll find that I think it is easy to rail about predatory for-profit colleges but far harder to examine the conditions under which millions of the least of us find themselves with few viable options but to pay too much for a credential that offers too little. I could cry on Dan Rather about the indignity of it all or I could push self-proclaimed progressives and liberals to accept their own culpability in maintaining an economic and social system that has trapped millions in a maze of poor options. I could reduce the failures of for-profit colleges to the characteristics of its mostly poor, brown, female bodies but I choose, instead, to lay bare the political alchemy that transposes lives into profit margins.

That may not be angry or polemic enough for you but I do not have the privilege of performing public hissy fits and retaining my authority on the subject I have experienced, examined, and researched for almost a decade.