**Note: I have mentioned that I rarely do line edits on blog posts. Many have surely noticed. I can rarely type quickly enough to keep up with my internal dialogue, hence most of my writing flaws appear here regularly. Editing is always the final step of my writing process. It involves paper and pencil. That rarely happens for a blog post. This post will probably exhibit my writing flaws even moreso than usual because I am writing very, very quickly. That’s somewhat disrespectful to readers. Please accept my apologies.

As a current student at a for-profit institution, I found your article very insightful. I can see where many of the responses are coming from. Perhaps I have been lucky with my instructors and feel I have received an education that made my time worth it. As a former military veteran (2 wars, Six years) I hate how the media has spun the situation to make it seem that my social peers as well as myself are being “preyed upon”. In fact as a military Team Leader, a well-read individual and a current IT Professional – I find it insulting.

I decided a technical “for-profit” school was better for me as I wouldn’t have to be forced to participate in the extra-curricular crap associated with public universities. I knew walking in it was about them wanting to soak up my GI Bill. Just like I knew the Community College I attended (with a high GPA) wanted to also. Quite frankly – I got tired of some 45 year old bitter divorcee lecturing a classroom full of obnoxious spoiled piss-ants on the liberal interpretation of leadership.

Also, I was sick of not being treated as an adult at a community college. I’ve led grown men in the battlefield. I’ve managed over 1.5 million dollars of mission critical assets at any given time. I’ve taken weeks strait of leadership development courses. I’ve been directly responsible for soldiers lives. I needed a piece of paper that would translate my expertise to employer terms.

ITT did just that…and hell – at least they PAY taxes. Public Schools filter them to fat cat board directors and retirement packages for the establishment “in group”. All Schools are for profit.

There are several threads I want to pull out of this comment. First, the commenter (we’ll call him JJ) is a veteran. The political interrogation of military enrollment in for-profit colleges has been one of the more popular media narratives to emerge from this debate. It picks up on cultural tropes about God and country and our moral obligation to soldiers in ways that narratives about poor single mothers does not. There is current legislation to limit the institutional benefit of enrolling a high number of veterans in for-profit colleges. JJ is at the intersection of that debate.

JJ also alludes to an awareness about the for-profit institutional distinction that is somewhat rare among students I interview or in my casual interactions with the general public. A small survey of online students noted, in an aside I found more interesting than the main findings, that something like 15 percent surveyed had no idea if they attended a for-profit college or not. For all the higher ed wonkiness about this issue, we can often forget that the general public just isn’t into our fetishes.

That JJ is aware of not only the institutions for-profit status but the dominant idoelogical framing of for-profit colleges as predatory suggests his comment is a great reflection of the rationale that we try to measure in rational choice models of why students largely self-select into for-profit colleges (see Chung 2013).

Like many for-profit students, JJ’s educational biography is very important to his perspective on his education. I find, repeatedly, references from students about not liking high school or an earlier attempt at college. Chung addresses this in her study on for-profit students as “lower than median cognitive abilities” among for-profit students, as measured by standardized tests. I rather hate that language but its economics and I get their constructs so I try to pull out meaning without getting stuck on the wording.

What I think Chung addresses that is reflected in stories like JJ’s is that many people in for-profits would really rather have not needed a credential at all. They wish companies respected experience, skills, knowledge. Oddly, people on the ground know that the ideology of companies wanting more skilled labor that is used to justify the for-profits niche (and MOOCs, by the way) is not at all true of how companies hire. They don’t want skilled, if uncredentialed labor, as much as they want some external certification of skill that saves them money on ascertaining that skill or developing it at their expense.

JJ’s “I needed a piece of paper that would translate my expertise to employer terms” is stunning for its summation of how people are living credentialism.

It’s hard not to laugh when some of us that know how to do “real” college see marketing and ads from for-profit colleges. But, JJ’s relative savvy about the credentialism shell game happening in the labor market points to another point about the complexities of these issues.

On twitter today a tweep shared an image of a for-profit college (note that the school became a non-profit this year after 100 years as a for-profit) brochure mailed to us. It notifies her that she has been “selected” to receive an application for a scholarship to their college. It’s obviously problematic. Obviously. Like many on my feed, I snarked about the framing of scholarships as a lottery even as I understood: 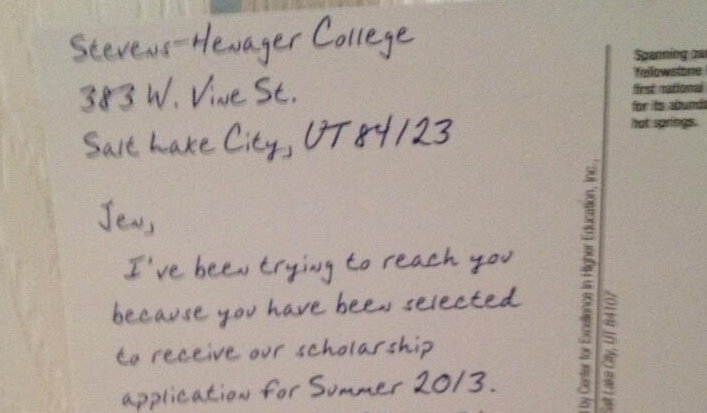 I have about 75 hours of interviews with for-profit students for my study on admissions. With some variation by gender and class, all in the survey talk about waking up one day after a long period of economic uncertainty with the idea of going to college.

Middle class folks, like those Annette Lareau talks about in her famous book, cannot fathom this kind of decision process for something as important as going to college. Wealthy and middle class have been going to college since kindergarten. Everything poured into them by their family and social groups, and even in a way by our larger culture, is about teaching them how to do real college.

Those are all middle and wealthy class status markers. Traditional colleges set up their admissions process with teh assumption students have them.

But, trust me, there are many people who don’t know that there’s a difference between Emory University and ITT Tech. Unlike JJ, its not that they  know and have calculated for themselves what they need to accomplish their goals. It’s that college is college.

I had one bright student at a large public college say to me that she “applied” to DeVry as a “safety school”. Safety school is the language taught to college tracked kids. It has lots of implicit assumptions about attending knowledge of the prestige hierarchy and competition of traditional college admissions. That this young lady used that language suggests some efforts to counter information asymmetry in her life. Either a mentor or TRiO program or her own ingenuity had done some work and figured out that you spread your admissions risk around to different levels of colleges.

But she applied to DeVry.

She saw no difference between her public uni and DeVry. The class snickered and I stopped them to unpack that. Hopefully, I did it while respecting her intelligence because we don’t often do that.

We laugh at JJ but he knows that all employers want is a piece of paper and he’s earning it the easiest way possible.

We laugh at the stupid for-profit college ads but they know people are making hard decisions in a split second and they need to be the next name to cross those people’s awareness when they do. The content — win a scholarship application! — largely is irrelevant to those not socially conditioned to do real college. It’s just being the next ad after the decision.

We laugh at the young lady with a for-profit safety school. But she’d overcome huge amounts of the enclosures — material, spatial, symbolic — that perpetuate our status culture  to learn some of the more explicit rules of a largely implicit admissions game. That even with all of that ingenuity and effort she still couldn’t figure out the game says more about us than it does her.

This is not judgmental. I laugh at the worst for-profit ads too and I know all of this for a living! It’s natural. We’re human. But I think I just wanted to point out that when we embed our knee-jerk reactions to this kind of stuff in our construction of “lower cognitive abilities” or “prey” or “victims” we’re building in a lot of bias.

I really hope I respect my respondents and the people i study. I really do. The idea that I might not by mistake or lack of attention to how I do my work makes me physically ill.