William Tierney is president of AERA, an organization that was my first professional academic home. I respect Bill’s work a great deal. However, his article in HuffingtonPost today and for-profits made what I consider a tactical omission.

In battles of legitimacy we too often mistake legal authority with rightful authority. One can have the legal right to do something that the general social norms dictate as unappealing. One of the great mistakes made by public education is the acquiescence to market language and capitalistic jargon. When we start talking about content delivery, consumers, and markets instead of education, students, and schools we’ve conceded the rightful authority of the market to dictate a public good.

I thought Bill’s acquiescence to a market solution to greater educational participation did something similar. We have NOT settled the debate about education as a public good. Speaking of it as a foregone conclusion is premature and dangerous. I do not, as I say in my response (also on HuffingtonPost) accept that the only way to economic prosperity is through the privatization of higher education. I strongly believe that there is power in setting the record straight when such assumptions are made. It’s a belief I’d not really articulated as such until my friend, T.F. Charlton, wrote her great piece this month on how the media ran with a false story about Gabby Douglas.

You can catch my HuffPo response to Bill’s article here. 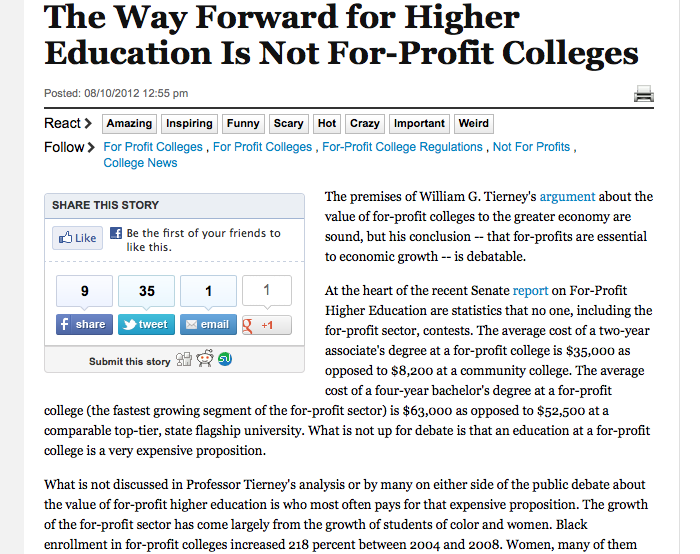 With all due respect.