Two things prompted the rampant display of theorizing you’re about to see unfold in real time. One was a chance conversation with a group of powerful, accomplished women academics. The second was an article that came across my twitter feed about women bloggers.

The conversation with the women academics was not too uncommon for me at this point. Whenever a group of academics are gathered and the idea of social media comes up, I have found extreme resistance to the very idea of online engagement. I don’t mean just dismissive attitudes about that new fangled technology but virulent, vocal attacks on social media that usually include things like it’s a waste of time, it distracts from “real” life, and that it is some kind of elaborate fad for “other” people.

As a sociologist I’ve been intrigued by the piling on that happens during these conversations. They quickly devolve into a game of Who’s The Best Luddite. And it is most definitely about hierarchy and power. The most senior academics who, by virtue of being senior, tend to be older start by waxing poetic about how they wrote their first books on legal pads. Then a slightly less senior academic has to show that they are in the cool Luddite group and they talk about how they refuse to buy a smartphone. Then the next junior scholar slaps his or her Motorala Razr phone, circa 1998, on the table and regales us with stories of the stupid cuss who checks into foursquare when they are at an organic farm-to-table unpretentious pretentious eatery. Finally, by the time you get to a grad student or some poor new hire the only place left to go is to a discussion of their technological ineptitude and wistful longing for the days of Laura Ingalls.

That’s interesting enough in itself except there’s an added gender layer. I’ve found that women academics, regardless of rank, are the most vocal about their dislike of social media.

A recent conversation with a tenured professor  makes my point. After preemptively apologizing to me, she expressed not just a dislike but a profound hatred of blogging. She had several reasons for this but the most consistent ones were that blog posts exist in perpetuity and that people comment too fast and too often.

Of the women who expressed some shock about that as even a consideration both of us were black.

That brings me to the provocatively titled blog post about women destroying their careers by blogging. The author isn’t speaking to academics but she makes several salient points. Chief among them is that blogging is hard. It can be easy to overlook this because blogging platforms (and other social media) are so accessible but engagement can be time consuming, challenging labor. The second point she makes is about the honesty required to have a blog that is worth  a damn to any readership worth having.

She talks about losing friends, upsetting potential employers and clients and all-around making a fuss because of an opinion she staked out in a blog post. 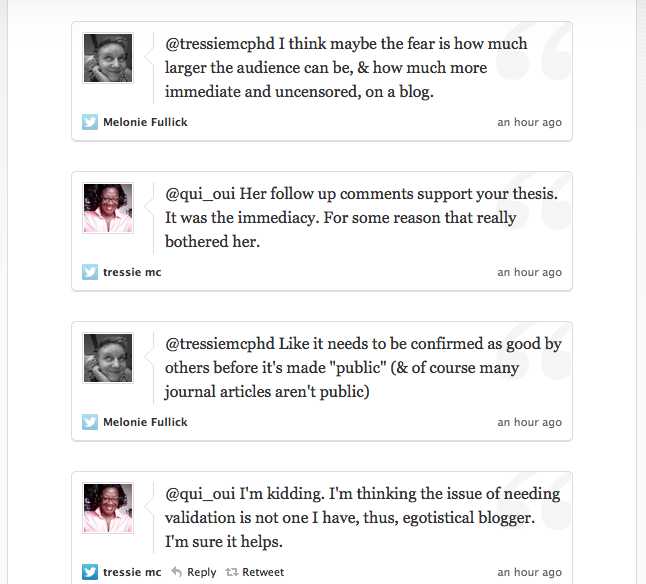 That issue of validation led me to a discussion I’ve had here before about relational expectations with power and how that is different for different types of women.

I do not expect to have a chance in hell of being validated by a white, male power structure. As a woman I imagine that being possible in one of two ways. I can become Oprah or I can marry a beneficiary of white, male institutional privilege. Oprah ain’t giving up being Oprah without a fight and the chances of me marrying a white man who benefits from whiteness and maleness is akin to my chances of winning powerball WHEN I NEVER BUY A LOTTO TICKET.

As such I assume a distant proximity to that power structure. Therefore, there is little risk for me in engaging in an illegitimate, low status online medium (as constructed by a specific type of academic hierarchy). No, my online work will likely never count towards tenure and promotion, as one tweep rightfully pointed out. But, the vehemence of the disregard for social media I most often encounter from women in academe suggests there is something more fundamentally threatening about writing a blog post than just a simple time cost-benefit analysis. If it was that they’d just say, “I’m too busy to blog!” And that would be perfectly OK.

Instead what I sense is a rejection of the form of social media as a means of procuring bonafides in a white patriarchal power structure. I suggest that even considering such a structure as an acceptable avenue for one’s legitimacy speaks to a person’s understanding of her social proximity, no matter how tenuous, to that structure.

That’s why I and the other black woman in the space both looked befuddled by the reactions to social media engagement as somehow dangerous. Dangerous is relative, after all. And maybe our kind of dangerous — being black in academe — had recalibrated our tolerance levels. It is why Meredith’s post on the risks of honest engagement was so striking to her readers. It’s why, I think, we see the cultural bifurcation of online spaces: white men who feel entitled to be heard and minority out-groups who seize upon such spaces as opportunities to be heard, seen, and connected.

Now, I fully admit to never having thought this through before an hour ago. I could be full of shit but isn’t every hypothesis full of it until it’s been tested?

However, I leave you with one other piece of my proffered puzzle. The area in which middle class, white women have been particularly dominant in online spaces is the mommy blog phenomena. The “mommy blog” emerged as a space where women could speak as authorities. That the subject matter focuses on the safest, least contested, gendered and classed domains of femininity — particularly of white femininity — is interesting. Just as interesting is an ongoing discussion among women of color who blog, often about the same issues of mommy bloggers, but who, because of their racial identity, felt inclined to speak to broader social issues found themselves marginalized in mommy blog spaces. Is blogging somehow less dangerous for white women when they restrict their authority to motherhood talk? Why are they so resistant to whole self talk about race or bigotry or social justice from black mommy bloggers? Could it be that venturing that far out beyond acceptable waters puts them at risk of making a dangerous observation? And dangerous to who, exactly?

It suggests that for some women, the risk of being honest in plain view in a low status medium might be as much about their fear of disrupting their tenuous claims to white male patriarchy as it is about being too old school cool for the internets.

Again, I’m thinking out loud here. And without n’ary a fear.

Funny how that happens.