I had a great time this week speaking to a collection of some of the nation’s higher education leaders. I also spent some time with my family. The story about family time is much more entertaining but the story about the keynote panel at the National Association of Community Colleges and Entrepreneurship is more enlightening and safe for work.

I joined Matt Reed (aka Dean Dad) and Angeline Godwin, the president of Patrick Henry Community College to kick off the conference with a discussion of the highered landscape. This was a slick affair. Academic conferences could learn a thing or two from the production crew that orchestrated this event. There were upholstered chairs, lights, and an apparatus I think could shake up the intellectual community more profoundly than did powerpoint: an automated countdown of how much time the speaker has left.

I’m not sure I fit in but I wanted to do what I usually try to do: contribute lessons learned from my interviews with students, work experience with non-elite student populations, and research in for-profits and highered “disruption”. I came in with two aims: to contextualize higher education disruption and to expand the notion of what constitutes an entrepreneur. The Hustleman and Cake Lady are entrepreneurs, too. They’re not as sexy as the next Zuckerberg but the value of community colleges is that they don’t do what’s sexy. They do what needs to be done for those who have no other way to get it done.

I think the talk went well. I covered MOOCs, diversity frameworks for understanding entrepreneurship as a range of activity, and the political process of federal and state data collection. At the close I did a relatively quick exit to decompress as I like to do after having 500 people staring at me under bright fluorescent lights. On the trip from the ballroom to the lounge I was stopped by three black hotel staff workers. I’m used to this. They are often older, but not always. Either way, they’ve worked in places like the Hilton for many years and they have rarely, if ever, seen someone who looks like me — like them — on the stage. They want me to know they’re proud of me. I’m a good southern girl so I mind my  manners and my elders. I say yes ma’am, I’m in school. Yes, sir, my momma sure is proud of me. Thank you for praying for me.

Even my colleagues make a point of telling me that they are proud, of acknowledging my existence. A loquacious, entertaining, generous senior professor from Illinois bee-lined towards me as I found an empty seat. He didn’t even bother with introductions, as family is liable to do. He just started in with, “i sure did like seeing you up there.” I know what he means but he wants me to be clear. He goes on to tell me how long he has come to events like this and how rarely he has seen a brown face at the front of the “big room”

He asked what, by the end of the day, I was asked about half a dozen times: “how did that happen?!”

Reflecting on how “it happened” is a commentary, I think, on good people, allies, and the malleability of privilege.

Matt Reed is a smart guy. He’s smart in the way I prefer. That is, he’s so smart he doesn’t feel the need to perform smartness. He writes clearly about muddled things. Through twitter we found out we had a bit in common. We both have first-hand experience in both not-for-profit and for-profit colleges. We examine the system that produced them and us. Awhile back he dropped me a line saying he’d like to invite me to a thing. I responded because he is smart and we have something in common and it was kind of him to ask.

Matt was invited to NACCE. And, for good reason. He has a book on community college administration. He has a regular column in Inside HigherEd.

Matt told the organizers that he’d do it but he wanted me there. This was before I ever knew the event existed or that he thought well enough of me to do so.

Matt’s invitation was an extension of his legitimacy and privilege. Now having shared jokes and drinks and dinner with Matt I suspect this never occurred to him. Just as I know that it never occurred to him that me being at the front of that room made a difference for folks for reasons that extend beyond academia and scholarship. Flipping through the program, it’s not hard to see that one of these things is not like the other: 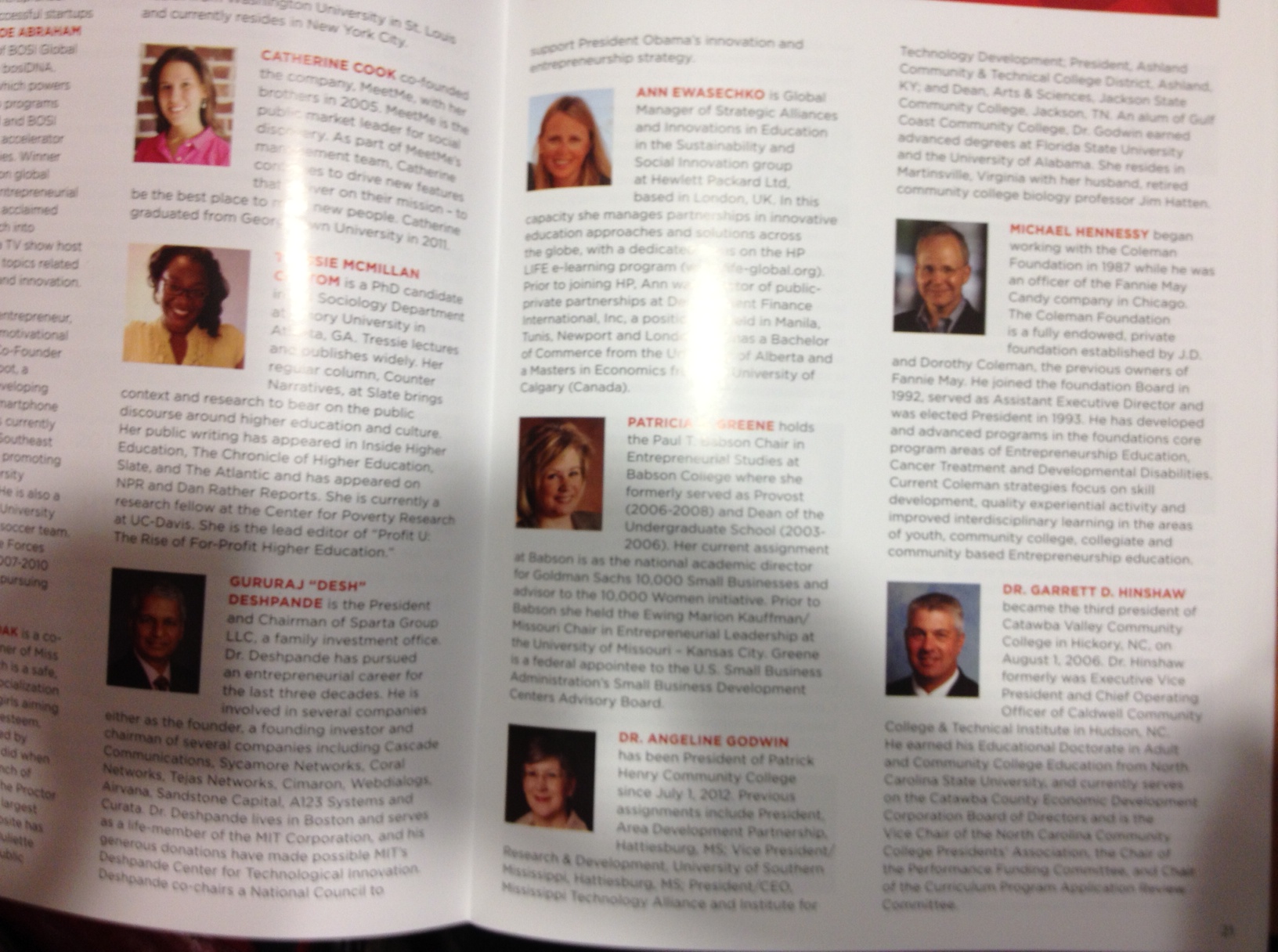 We talk a lot about how few women, how few people of color, how few critical voices get space at the front of big rooms, on big stages, beneath big mastheads. Tech, higher education, classrooms, broadcast tv, cable tv, the professional pundit class: all do a horrible job of finding expert voices that don’t look like them, didn’t do go  to the same school as they did, don’t live in the same neighborhoods or entertain in the same circles. Matt wades through my twitter feed, the comments about my hair and Eddie Murphy’s career. Somehow content not exactly native to his experience doesn’t bother him. He sticks around (I think) for the moments where we intersect. It cannot always be comfortable but its in those moments when we have great exchanges of information and support. And when a big stage, a big room was extended to Matt, he made it make room for me.

The difference for the hotel staff and at least some of the participants was palatable. I hope it had a similar impact on the dialogue. I really hope it models how each of us can extend space to others, making a few ripples of difference where we can. This isn’t just for white folks or men, this difference making. Women can bring along other women who would never have been invited and brown/black/tall/short/inside/wealthy people of all stripes can do it. I think we’re better when we keep an eye out for when and how we can do it.

One black man old enough to be my momma’s best friend said to me, “girl, you made those white folks LISTEN!” I reckon decorum made them listen (we had the microphones and the fancy countdown timer, after all) but for sure i was there because one white folk did indeed take the time to listen.