A post from my friend at the Intellectual History blog brought to mind how my personal love of all things library-ish relates to some larger concerns about structure, intellectual capital, and public sphere.

I have resisted considering my  fetish for physical books as an object of serious inquiry. It struck me as navel-gazing and, worse by our current cultural standard, technophobic. I am not a Luddite, as should be evident in how I use digital tools in my scholarship, career, and personal life. I think I’m even something of an early adopter within a narrow purview of utilitarian digital products. As I already complicate technical solutionism in education I did not want to also be one of the town criers shaking a leather-bound book at the sky bemoaning the death of literacy as our culture moves towards e-books and e-readers. Plus, I just hadn’t thought deeply about the subject.

L.D. changed that for me tonight. My thoughts here are nascent and wholly incomplete. I primarily want to encourage you to read L.D.’s posts on the subject.

My first reaction to the post was personal. Libraries served many critical purposes in my development. When my mother was a single parent we were likely poor. It is hard to remember. I was happy and I had a window seat in my bedroom and I did not do our taxes. But, sometimes there were space heaters. I think we were poor. I remember walking miles with my mother several times a week to the local library. You could do anything there. Perhaps, more importantly, librarians treated me like an autonomous person. They talked to me directly and asked me what I wanted to read. Owning a library card necessitated owning a wallet which justified owning a purse. For a kid, that’s a major departure from the parallel but often distinct spheres of kid v. adults.

Later, in school, my respectful but stubborn insistence on skipping ahead in class made me difficult to teach sometimes. By the fourth grade I had a standing library hall pass. When I wanted to move ahead or go left entirely from the day’s curriculum Mrs. Sims would just sigh deeply and tell me to go the library until she sent for me. You may not remember but in elementary school you do a lot in groups and pairs. You have buddies when you go to the bathroom. You eat lunch in groups A and B and so on. You hold hands in a line as you move from one room to another. Roaming the halls alone gave me a sense of pride. In retrospect, my coveted library pass probably wasn’t all that coveted. It also probably did not make me nearly as cool as I thought it did. But, the time spent in the library was important. I fiddled on the donated MacIntosh computer, figuring out that open-apple and closed-apple did different stuff on the monitor. That is still, as it happens, the backbone of the knowledge I scaffold to understand technology infrastructure. I devised games to dictate what I would check out. Sometimes I checked out all red books. Other times I browsed along and tried to find the fattest spines so I could read the world’s biggest books. That is, coincidentally, how I read the Autobiography of Malcolm X. It had a thick spine. That book changed my life. In the Heroes and Holiday tradition of multiculturism education I had little formal exposure to Malcolm. It was all Martin. I learned black people were not a monolith quite by accident.

Again, all navel-gazing. But, as L.D. points out the unmediated relationship I had with books occurred because the expense of owning and maintaining physical material was subsidized by the public sector. Possession of a book was not just 9/10ths of the law, it was a commandment. I owned the book in my bag until I returned it (confession: I never returned the Autobiography of Malcolm X. I now owe Forest Park Elementary probably a zillion dollars). My reading happened mostly absent of structural constraints on how I might engage the material.

L.D.’s post reminded me of a news story I read some time ago about who owns an e-book. It is, I think, still somewhat of a gray legal area* but as it stands the material loaded on your corporately produced reader can be wiped clean at any time by the manufacturer. Granted, I don’t think that can happen without consequence but consequence is a social construct. Consequences can change. The technological superiority to recall content is an engineering construct and is more resistant to social intervention.

I remember reading that story and not thinking of it in any context larger than my personal love of libraries and books. It was a scary thought but I did not follow it beyond that feeling. But L.D.’s essays got me thinking about my own work documenting the landscape of for-profit colleges. When possible in my field research, I take pictures of the resources and geographies of for-profit colleges. It is common in the sector to eschew physical libraries with many volumes for electronic libraries or resource rooms. They are not unlike the story about a new bookless library in Texas, also read tonight. 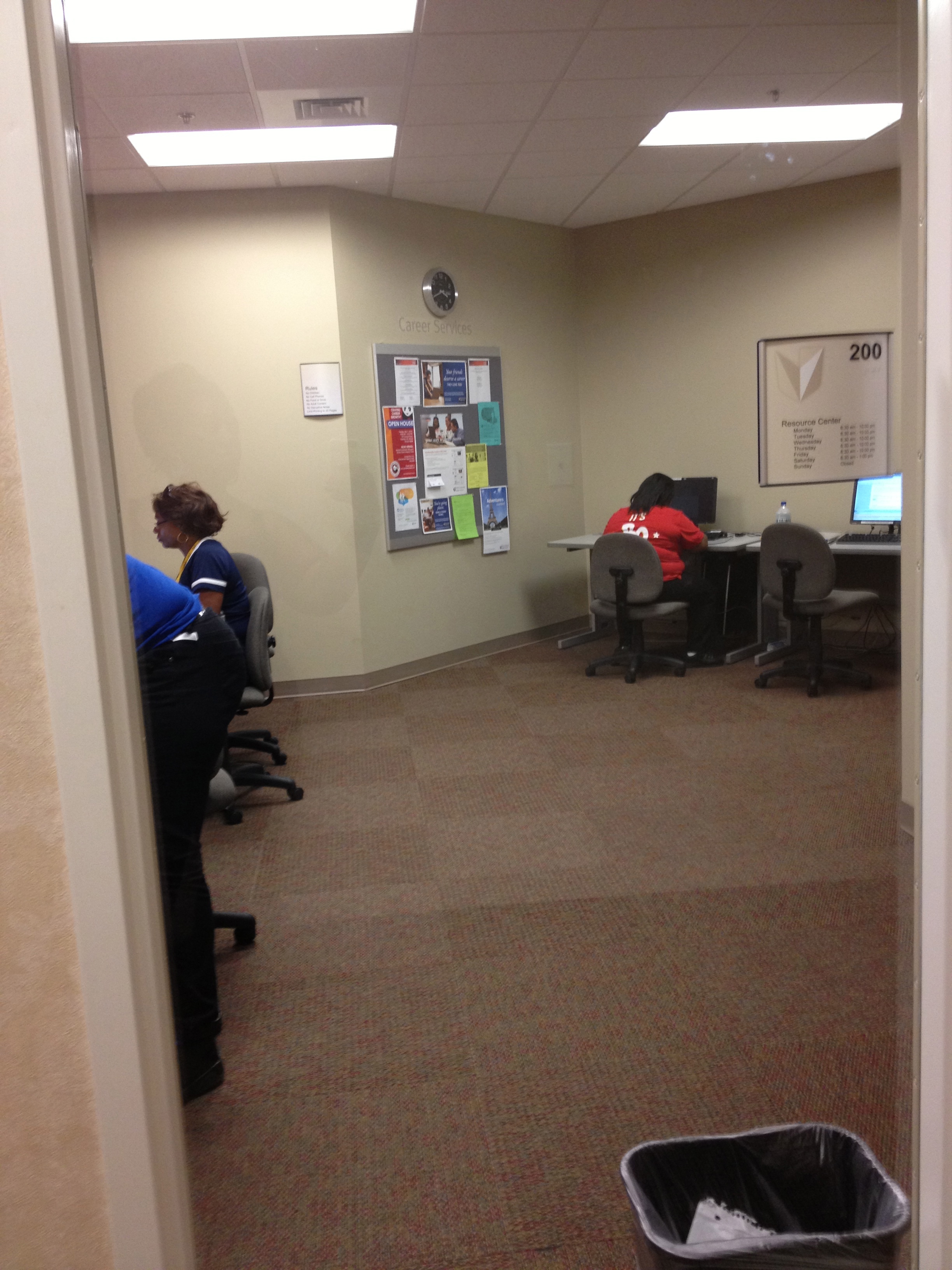 The idea is rational. It is, as L.D. points out, expensive to own and maintain a large amount of books. Managing real estate costs is a specialty of the for-profit sector. Reducing the college’s square footage reflects the organizational imperative to maximize profit from tuition income. Getting rid of expensive libraries is a no-brainer. While there is some variation, for-profit colleges were early institutional adopters of electronic text books and materials. They are marketed as cost-effective for students who are practically-oriented. I don’t doubt there is some truth to that. But it would be naive for someone who has read the financial disclosures of for-profit colleges to not note that electronic texts are also cost-effective for the owners.

These resource rooms-slash-libraries are interesting spaces. They become more interesting when juxtaposed with the characteristics of for-profit students and L.D.’s compelling argument about book ownership as a transference of wealth from the public domain to the private sector. Do for-profit students own the electronic textbooks they are provided? Even if that ownership isn’t of individual value to students, could it be an institutional value? Do these spaces offer the same kind of opportunities for exploring information beyond the authority of a technology platform, an institution, or an instructor? Does it matter that content access and ownership operates differently by institutions and higher education sectors?

I don’t know. Again, these are very early, likely wholly useless ideas in response to L.D.’s intriguing argument. But, something about the idea of owning books as wealth transfer challenged me to reconsider my love of libraries as too nostalgic, too trite, too inward facing to be worth considering in any larger context. This isn’t my area. If you know of any good reads or sources along these lines, I’d appreciate them. I imagine coming back to this one day, if only for personal development.

Read Intellectual History!! It’s a good time. I mean, if you’re the kind of person who covets library hall passes.