When I was working on the study that would inform my new book “Lower Ed”, I had a set of questions. Given some recent critiques of the book, it is worth reviewing them. This is also a really great moment to peel back some layers on how the research process goes.

First, a summary of the critique from this week’s Letters to the New York Times Book Review editors in response to their recent review of “Lower Ed”: 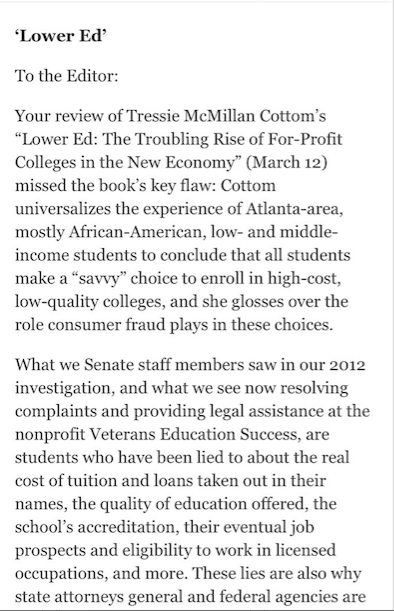 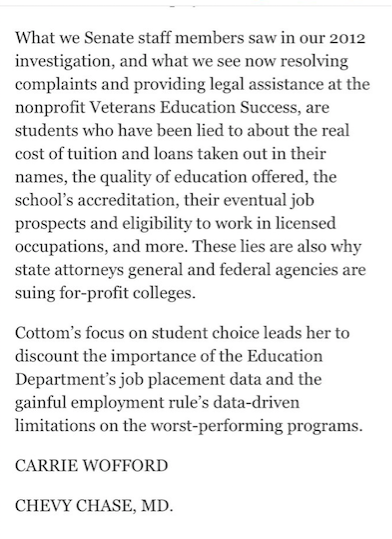 Carrie Wofford is, according to her official bio,  President of Veteran’s Success:

Prior to founding Veterans Education Success in January, 2013, Wofford served Chairman Tom Harkin (D-IA) on the U.S. Senate Committee on Health, Education, Labor, & Pensions (HELP) as the Senior Committee Counsel across the Committee’s issues, where she was described by The National Journal as someone who “wins high marks.”

Carrie Wofford was also the moderator for a recent panel I did at the Economic Policy Institute on “Lower Ed”:

As I understand it, Carrie’s critique hinges on two issues. One, my data are not generalizable and, two, I do not write about the Department of Education’s work to stem abuses in the for-profit college sector. I will take these in turn.

As I mentioned in a discussion of this on Twitter, Carrie seems to misunderstand how case selection works in a study like mine. When I was doing my research for my dissertation, I chose Atlanta for a few reasons. It is easy to assume convenience. I was in graduate school at Emory University, which is located in Atlanta. As it turned out, the site was fortuitous.

As I mention in the book and in my dissertation, Atlanta has one of the most robust and diverse higher education fields in a major metropolitan area. That means it has a good selection of all the kinds of institutional characteristics that research in sociology of higher education and education research have deemed important (see: Stevens, Armstrong and Arum for a good overview here and also Gumport): public, private, public community colleges, historically black colleges, and for-profit colleges.

Unlike London, a respondent in my book, students choosing for-profit colleges in Atlanta, GA are not doing so because they live in an education desert. They are doing so despite living in a higher education buffet: lots and lots of choice.

Atlanta was also fortuitous because of the racial and class composition of the city. Basically, it is black. And it has a really robust class structure for African Americans, unlike a metro area that might have more poor blacks (e.g. Philly) or a non-representative black upper class (e.g. D.C.). I was explicitly interested in something that had been missing from public policy, advocacy and research: the issue of why black folks are so ensnared in for-profit higher education. Therefore, it made sense for me to choose a field site that had a good race and class hierarchy to observe differences and not flatten analysis in ways that aren’t about what I’m interested in studying.

I had a lot of conversations about this with my dissertation advisor. I chose Atlanta very deliberately after comparing demographic data on: Charlotte, NC, Chicago, IL, Bay Area, CA, and New York City.

There was also a cost-benefit analysis happening here. New York City would be very interesting for this study, especially given the robust ethnic groups in the city. But, I had about zero money. No major agency was interested in a study like this. I had to weigh the costs of living in NYC versus any significant analytical differences doing so might make. In the end, I decided it wasn’t worth it at the time.

So, contrary to Carrie’s claim, I do not claim that my interview subjects are representative. It is a qualitative study. Almost no qualitative study claims that, a methodological fine point perhaps lost on generalist audiences. But, neither do I claim to generalize from my field site. Instead, I chose the field site based on generalizable data, or macro trends of interest in my study: race, class, higher education field diversity. Ergo, my data is more representative than Carrie’s in that it considers the macro context of those data, chooses data to be systematically collected, analyzes it systematically and doesn’t make general claims based on non-systematic data collected from a student population subset (i.e. veterans). That’s a point I made to Carrie on the EPI panel, by the way.

Next, is Carrie’s point about my “glossing over” the role of predatory fraud and deception and the significance of the Department of Education.

I don’t really know where to start with that except to say, uh, that wasn’t my research question.

More specifically, I was interested in the context of student choice and the organizational machinery that attracts and enrolls them.

In the course of doing that study, I did field research at nine for-profit colleges chosen for their representativeness (based on a model produced by the Institute of Higher Education Policy, a report on which I worked).

During that field work, I recorded the conversations, the built environment, the information provided. I tracked points of contact for three months: phone calls and emails.

As I report in my book, I found no significant evidence of “fraud” or “lying”. Luke Herrine, legal advisor at the Debt Collective, recently questioned if I understand the legal standard for fraud:

But do you know what the standard for consumer fraud is? Again, fraud =/= lying.

I probably do not. I do know that in my study the issue of “lying” would suggest I had data on intent to willfully mislead on the part of for-profit college actors. I do not have that data. And, not a single student I interviewed would characterize their interactions with their recruiters or financial aid reps or professors or dissertation/thesis advisors that way. For me to input intent on these actors despite their own reporting of their experiences would be ideological colonization. Ethnography and critical sociology methods resists this kind of imputation on respondents. It assumes they cannot tell their own experiences and prioritizes political projects over intellectual and liberatory projects. That’s not my jam.

What I did find: in about 42 percent of the segments from this fieldwork that I code as “perception of prestige/risk”, for-profit college actors did some artful sleight of hand. This mostly appeared in how they presented the info sheets that list the Bureau of Labor Statistics job data. It looked like over-emphasizing the “fast growing” nature of some careers and not providing contradictory, nuanced information on job pay, mobility or job quality. Whether that is fraud is not up for me to decide. It seems like a lawyer’s job. I am not a lawyer.

I have been, at times, an advocate for students, especially black women students in for-profit colleges. I don’t talk about that work because it isn’t anyone’s business. But let me say that unless those women want me to talk about how they were lied to or how white Jesus didn’t save them or how they were stupid? I won’t be rushing to do so any time soon.

But, more broadly, I think it is interesting to think about why it matters so much to some people that I charge for-profit colleges with fraud despite that not being germane to my argument, evident in my data, or my job.

I care deeply about justice and one of the best ways that I know how to support that commitment is by doing ethical work. It would be unethical of me to draw conclusions that I cannot support even if I believe them likely true or potentially useful as political rhetoric.

Also, it is a strange political move to require of me — the person who makes a case that says for-profit colleges, even if regulated, are a social problem with dire consequences for inequality — to undercut that argument by focusing on issues not important to my analysis or a focus of my work.

There are many other books out there that had different research questions that might provide more of what some readers are looking for. I suggest “Diploma Mills” by A.J. Angulo and Suzanne Mettler’s “Degrees of Inequality” to start.

Of course, one could always write the book they want.

I do not work on spec.