This is the obligatory end-of-year essay.

In 2015, I finished a seven-year-long research project called my doctoral dissertation. The study analyzes why for-profit colleges were the singular form of higher education expansion in the late 20th and early 21st century in the U.S. Data are from: interviews with for-profit college executives, students enrolled in the fastest-growing sub-sector of for-profit college credentialing (graduate degrees), admissions data and Securities and Exchange Commission filings of the publicly-traded for-profit colleges where most of the sector’s growth and profit occurred. Theoretically, the work owes a significant debt to David K. Brown and David B. Bills work on status competition theories of educational expansion. Thanks to that project I won Emory University’s Laney Graduate School award for doctoral leadership.

I use quantitative and qualitative textual analysis in that project. That work informed some of my thoughts in a forthcoming paper on textual analysis across disciplines. That paper, in Debates in Digital Humanities, slices off a small part of the discussion I had in my dissertation about the political economy of the data produced for markets and publics in various forms of discourse analysis. I owe a big intellectual debt to Roberto Franzosi’s early work on computational models, programs, and socio-linguistics in that paper.

Another paper touches on what I consider my second line of research as a tenure-track professor: the deployment of digital assemblages, platforms and discourses in social processes that sociologists understand as an interlocking set of categorical inequalities. I discussed how race, class, and gender mitigate returns to micro-celebrity within the neoliberal era of the corporate university. I’m a big fan of Sheila Slaughter, Gary Rhoades, Gaye Tuchman and Elizabeth Berman’s work on how we got the university system we currently have. It seemed to me that the “democratization” narratives embedded in digital tools like new media outlets and social media networking sites obscures both the structural realities of the universities where we use them and the group differences among those who have to use them to get and keep their academic bona fides. It was a scary paper to write. The ADA editorial process was divine. I am excited to continue that conversation with the growing number of sociologists working on digital sociologies, like Mark Carrigan. Mark is kind of scary smart, by the way.

One regret from that paper: that Maria Azocar and Myra Marx Ferree’s latest on gendered expertise (in Gender & Society) wasn’t out yet when I wrote it! I looked for the perfect articulation of how I was grappling with “expertise” as I was writing that paper and, of course, Azocar and Ferree were apparently nailing it in another dimension. *shakes fist at sky*

While doing all of this I started a wonderful job at Virginia Commonwealth University. This semester I taught some of the most engaged and committed students I have ever met in two courses: “Minorities in the U.S.” and “Sociological Theory”. My students have said that the class was transformative for them. I know that it certainly transformed me.

I teach the “Minorities in the U.S.” course as a survey of classic and contemporary sociological theories of race (and to a lesser extent ethnicity) with an emphases on institutions (although we discuss ideologies, identities and culture). We read L’Heureux Lewis-McCoy’s book, “Inequality in the Promised Land”, to anchor the institutional discussion of how schooling interacts with and reproduces racial inequalities.

Because of what I do and how I do it, the course has a significant focus on applying sociological concepts to contemporary case studies from media, politics, and culture. VCU students are incredibly diverse, by every definition. I stretched to make sure we complicated the black-white binary while reinforcing that the binary still defines that racial hierarchy. That meant relying heavily on groups like the Teaching With A Sociological Lens group on Facebook for examples that go beyond black and white in race literature. Students seemed especially engaged with the discussion of 1) black ethnic immigrants 2) interracial mating (and assortative mating more broadly) and 3) recent work on Asian American men-black women and colorism in online dating. (I mention all of this in case anyone has any teaching tips to share).

Along the way, I reviewed Ta-Nehisi Coates’ award-winning “Between The World and Me” for The Atlantic. I followed that with a series of essays on various inequalities in The Atlantic as well as my ongoing contributions at Dissent Magazine (as a contributing editor and fan).

I was also honored to travel to South Africa this year at UNISA’s invitation. The conference on open and distance education had a global perspective and some of the most engaging scholars I have ever shared space with on topics of technology, institutions, and learning. Seriously, I’d wrestle a small, docile pig for this kind of discourse around technology, institutions and education to happen regularly in the U.S.

On the issue of fun stuff you get to do when you really like your job, I joined the Postbourgie podcast for a far-ranging conversation on race, culture and bad “good black men” memes. I also got to talk about education and technology on an all-woman panel, courtesy of Joanne McNeil and Eyebeam. All these women talked about manly-man computers and stuff and no one died. Moving from fun to glee-inducing tremors, I spent a several hours as part of the “Grasping at the Root” conference talking about the political economy of credentialism and educational justice. I say glee-inducing because any time I get to share space with Sandy Darity, Darrick Hamilton, Stephanie Kelton and a room full of engaged thinkers talking about the nuts-and-bolts of sustainable change? My joy becomes embodied.

I wrapped up a glorious run at The Message this year, where I’d talked about various forms of tech and inequality things. By far, I think the most read story there ended up being about the social signaling of Twitter “favorites“. Go figure.

On a more personal note (more personal that joyful tremors?), I am reflecting on what the last six or seven years have meant for me. For professional reasons I had to search myself recently (something I never, ever do). I realized that while I was working some amazing thinkers, scholars and writers were having conversations I would like to share. With gratitude, I’ll be catching up with those who have cited me:

It’s a pretty amazing collection and I am well nigh floored. But I have to say that one of the funn(i)est reads for me is Muscio putting me in conversation with Eldridge Cleaver: 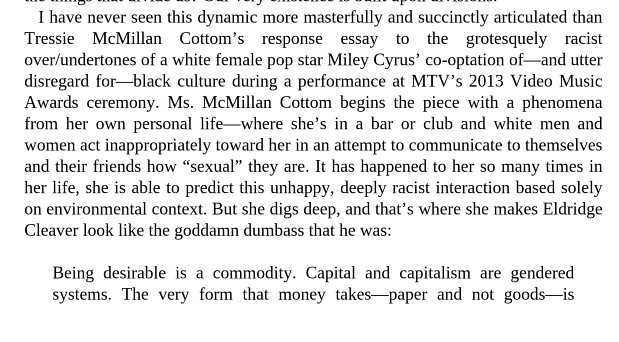 So, what’s next? My book, “Lower Ed” remains forthcoming. Sue me, I was busy dissertating. But, The New Press has confirmed it is on schedule for a release this Fall (2016). The opening chapters are already circulating and being put to use in sociology of (higher) education courses thanks to some really dedicated colleagues who requested it. We’re also beginning to hammer out a book event schedule (starting at Red Emmas perhaps??).

I am apparently also going to the White House, think-tanking at Stanford, serving at Sociologists for Women in Society, talking about the hip-hop tracks that changed my life with Rhymes & Reason, working on a disciplinary read of digital inequalities with Karen Gregory and Jessie Daniels, teaching a graduate seminar on race and digital sociology, and starting a new project.

Thank you for an amazing 2015, readers and friends and colleagues and tweeps. See you in 2016.