There are a few narratives floating around in the atmosphere these days about labor, training, and credentials. There’s the one that says we have serious skills mismatch in our economy. The solution, this narrative says, is to quickly “retool” the “labor force” for specific job functions. The other narrative says that public colleges have failed to produce employable graduates. This narrative gives us the useless liberal arts refrain and touts STEM careers of the future while bemoaning the lack of math and science acumen of today’s worker. This narrative gives us the ever popular “there are tons of XYZ jobs and no Americans to fill them!”

If you haven’t guessed I think these narratives are off-target, and that’s putting it kindly.

Inherent in the aforementioned lines of argument is this fallacy: that there are enough jobs for people who want them and are qualified for them.

Nothing could be further from the truth.

There are approximately 12.5 million unemployed people in the U.S. today and approximately 3.2 million total unfilled jobs, not exclusive to fancy high wage labor like tech and science. We could limit all of higher education to just four majors in engineering, maths, physics, and bio-technology and the dial on unemployment still wouldn’t move much.

The first is the skills mismatch myth. The media loves this story. It’s the one that says stupid Americans are too busy majoring in basket-weaving and sociology to be of use to the “new” economy. As evidence they show jobs that have gone unfilled while lazy Americans beg for welfare checks. The problem, though, is a methodological one. An unfilled job is only evidence of an unfilled job, not a skills mismatch. It’s a classic logical fallacy problem.

To prove that jobs go unfilled due to a lack of properly educated workers would require a controlled experiment that randomly assigns skills to workers. This, of course, isn’t going to happen. But through a combination of ethnographic analysis and historical analysis we can determine a few things. One, job titles have changed over the years, certainly, but that does not mean that the job functions are qualitatively different. Is a “process manager” fundamentally different from the “administrative manager” of yore? Not much so. And most of the jobs sitting unfilled are not highly skilled jobs requiring such a unique set of qualifications that they can’t go filled so much as the jobs are written with such an unlikely set of combined skills as to be unlikely to be possessed by someone who has not done that EXACT job, as written, before. Essentially, what companies continue to want are people with proprietary skills, often on proprietary equipment, that have been trained at the expense of someone else.

Which brings us to the next issue: the disinvestment in the training of human capital by the private sector. Again, there are not enough jobs for everyone who wants and needs one. Of the jobs that go un-filled, they remain so because companies do not want to spend money to train someone for their specific needs. The solutions to that problem are to, one, wait for another private sector employer to train and fire the perfect employee; two, for a college education to have trained the perfect employee; and, three, for the individual jobseeker to pay for private vocational training.

My first job out of undergrad was as a corporate trainer with a telecom company. Newly hired customer service agents were enrolled in a four week training program. I provided training on “soft” skills like how to handle irate customers to technical skills like navigating the proprietary mapping and billing software the company used. The idea that the company would find the tens of thousands customer service agents its business required who already possessed experience with a customized mapping software the company had commissioned was ludicrous. The expectation was that the company would have to train its labor force to do the specific job they needed doing.

Today, the neo-liberal narrative of “useless’ higher education and poorly trained American workers is an abscondment of a not so distant corporate commitment to invest in the human capital from which it profits.

That public higher education has conceded the terms of the debate of their uselessness saddens me. College was never supposed to train thousands of widget makers. It was supposed to produce critical thinkers with fundamental analytical skills who could be trained to become widget makers. The reduction of higher education to a human capital production factory, working at the behest of the private sector is a symbol of how powerful language is. Once we start talking about skills and not knowledge, human capital and not people, training and not education, we have already lost the debate about the value of public higher education.

And, that’s too bad because I don’t see any desirable ends to these neo-liberal narratives. If we restructure all of higher education to produce “out the box” employees what happens when the jobs they’ve trained for cease to exist? Ask the mill workers in North Carolina who knew how to make the best damn textiles in the world and who were remunerated for those skills…until no one needed good textile makers anymore. Or, what happens when a company promises several hundred technology jobs, a local university shifts its focus to produce labor for those jobs…and the corporation doesn’t hold up its end of the bargain? Ask the many municipalities left holding the bag when promised tax incentives and labor development lured companies who didn’t respond in kind. 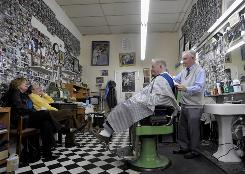 And what of the certification narrative that would have every employee act as an entrepreneur, collecting skills and badges incessantly, keeping their skills “up to date”? Continued education is a commendable goal but it is not a cheap goal. Those certifications are often as expensive as a college degree and that doesn’t include the investment of time and other non-material resources (missing your kids, not caring for an elderly relative, sleep). Paying for job training before you have the job is a tax. And it is a tax most likely to be paid by those least able to afford it. Certificates are, for many, a substitute for the cultural and social capital that higher class folks take for granted…and have free of charge. It’s poor, working class, lower status individuals who need most the miniscule edge a certificate provides in the job market because they don’t have friends in a position to give them “the hook up”. Taxing the individual poor and working class for the possibility of a job that may or may not exist is not a structural solution to a structural problem. It’s a way to feel less guilty about a busted economy that is destined to leave most of us behind.

If the private sector wants a perfect employee it should train one.

Will people leave, flake out, prove to be bad investments sometimes?

It’s a gamble but corporations are in the best position to absorb the risk. Individuals and the public sector are not.

Let them buy their own rationalization and let us stop buying it. They can afford it. We cannot.

Colleges don’t work for the private sector and, increasingly, despite all of our credentials and certifications and skills and willingness, neither do millions of Americans.

Stop blaming workers and universities for a bad economy that cannot absorb excess labor  and start blaming the private sector for not investing in its own human capital.

Anything other than a focus on those core issues is a distraction.